You may have heard a recent report of an archdiocese in the United States forbidding the St. Michael’s prayer to be said after Mass. On the other hand, there are several other dioceses around the world that have encouraged priests to lead this prayer after Mass. Until 1965, this prayer was mandated at the end of every single Low Mass worldwide. What has changed in the world and in the Church? Do we still need St. Michael’s help?  This can be a good opportunity for each of us to develop a greater appreciation of our heavenly protector.

As Catholics, we believe in the intercession of angels and saints, recognizing, of course, that their ability to help us is all through the power of Christ. St. Michael the Archangel has always had a special role in the combat against the devil and his demons. We read in the book of Revelation, “there was a great battle in heaven: Michael and his angels fought with the dragon, and the dragon fought, and his angels. And they prevailed not: neither was their place found any more in heaven. And that great dragon was cast out, that old serpent, who is called the devil and Satan, who seduceth the whole world. And he was cast unto the earth: and his angels were thrown down with him” (Rev. 12:7). St. Michael cast the devil out of heaven onto earth, and it is here that we suffer the wrath of the devil, who makes war with those “who keep the commandments of God and have the testimony of Jesus Christ” (Rev. 12:12, 17).

Blessed Ildefonso Schuster reminds us that “the battle waged in heaven immediately after Lucifer’s first rebellion is but a single episode in a long and bitter struggle which has endured through the ages, and on which the history of creation is founded.” This combat is between good and evil, and not one of us can remain neutral. The good have as their allies, “Michael and his angels, the Church and the Saints, who fight under his standard uttering the war-cry: Quis ut Deus? [translation of the name Michael, “who is like God?”] … on the opposing side are Lucifer and his fallen Angels, with all their supporters … preparing for the final battle which he will wage against Christ at the end of the world” (The Sacramentary, Volume 5, p. 145).

It should be a great consolation for us to know that St. Michael and his angels will protect the Church. According to the Benedictine Abbot Dom Prosper Gueranger, “Satan trembles at hearing this name [Michael], for it reminds him of the noble protest wherewith the bright Archangel answered the call of the rebel angels. Michael proved his strength and prowess when he fought the great battle in heaven. On that account, he was made the guardian and protector of God’s people; first of the Jews, and afterwards of the Christian Church…he supports her in her trials and she wins no triumph in which he has not had some part” (Gueranger, The Liturgical Year, May 8).

On October 13, 1884, after celebrating Mass in the Vatican, Pope Leo XIII had a terrible vision, in which the devil was given permission from God to wreak havoc on the Church for a period of 100 years. In this vision, the Pope also saw some of the terrifying events and loss of faith that would occur during this 100 year period. Shortly after this, Pope Leo XIII composed the now famous prayer to St. Michael and ordered it to be recited by the priests and faithful throughout the world after every Mass, adding this prayer to those instituted by his predecessor Blessed Pope Pius IX. These prayers eventually became known as the “Leonine prayers”. While this custom was officially ended in 1965, this popular St. Michael prayer still continues to be said in certain dioceses and communities, and in the Masses said according to the Traditional Roman Rite.

This is a time in which we need, more than ever, to call upon this great heavenly intercessor. His job is to help us. Let us each often call upon the aid of such a powerful helper, the greatest of the celestial army. Dom Gueranger informs us that God has given St. Michael a “compassionate love for men; and there is not a single soul that escapes his notice. He wields the sword in defense of the Spouse of Christ; he wars with the dragon, who is ever lying in wait for the Woman and her Child, but, at the same time, he is attentive to each one of us; for [in the Confiteor] after having confessed our sins to Almighty God, and to the Blessed Mary ever a Virgin, we acknowledge them likewise to Blessed Michael the Archangel and beseech him to pray for us to the Lord our God” (Gueranger, The Liturgical Year, May 8).

St. Michael assists at every death bed, to receive the souls of the elect and bring them to Heaven. And at the end of time, on that day of wrath, when Christ comes again to judge the living and the dead, St. Michael will have a special duty, of separating the good from the bad. The faithful, who have remained true to their baptismal promises, will be summoned to be with the Most Holy Trinity and the good angels and all the Saints, whereas the evil will be thrown down into the fires of Hell.  It is for this reason that St. Michael is sometimes portrayed in iconography with a scale, with which the deeds of our lives will be weighed.

We must each strive to be like St. Michael, always close to God, defenders of the true Catholic Faith, faithful to our baptismal promises. We must always seek to rid ourselves, with the help of God’s grace, of the pride, which is the source of all evil. The chief of the demons, at one point, held the highest role among the angels, but through his pride, he rejected God and refused to serve Him. Satan’s answer to God was non serviam (“I will NOT serve”). In our lives, let us daily choose to say yes to God (serviam, “I will serve”), to know Him, to love Him, and to serve Him in this life, so that we may be happy with Him in the next life.

St. Michael the Archangel, defend us in battle, be our protection against the wickedness and snares of the devil. May God rebuke him, we humbly pray, and do thou, O Prince of the heavenly host, by the power of God, cast into Hell Satan and all the evil spirits, who prowl throughout the world seeking the ruin of souls. Amen. 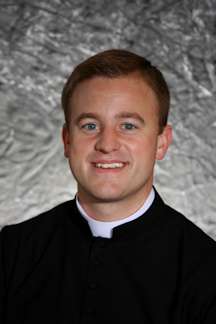 Fr. Zackary Akers, FSSP is a Christendom College grad and director of development of the Priestly Fraternity of St. Peter.  His area of expertise includes the sacred liturgy and the Traditional Latin Mass movement.