Active Works and The Interior Life: What They Mean

Sovereign liberality is inseparable from the divine Nature.  God is infinite goodness. Goodness seeks nothing except to give itself and to communicate the riches which it enjoys.

The mortal life of Our Lord was nothing else but a continual manifestation of this inexhaustible liberality. The Gospel shows us the Redeemer scattering along His way the treasures of love of a Heart eager to draw all men to truth and to life.  This apostolic flame has been passed on by Jesus to His Church, which is the gift of His love, which diffuses His life, manifests His truth, and shines with the splendor of His sanctity. Burning with the selfsame love, the Mystic Spouse of Christ carries on, down through the ages, the apostolic work of her divine Model.

How admirable the plan, the universal law laid down by Providence, that it is through men, that men are to find out the way to salvation. Jesus Christ alone has shed the Blood that redeems the world. Alone, too, He might have put its power to work, and acted upon souls directly, as He does in the Holy Eucharist. But He wanted to have others co-operate in the distribution of His graces. Why? No doubt His divine Majesty demanded that it be so, but His loving affection for men urged Him no less. And if it is seemly for the most exalted king to govern, more often than not, through ministers, what condescension it is for God to deign to give poor creatures a share in His work and in His glory!

Born, upon the Cross, from the pierced side of the Savior, the Church, by its apostolic ministry, carries on the bountiful and redeeming action of the man-God. This ministry, willed by Jesus Christ, becomes the essential factor in the diffusion of the Church among all nations, and the ordinary instrument of its great achievements.  In the front rank of this apostolate, stands the clergy, with its hierarchy forming the main body of the army of Christ, a clergy distinguished by so many holy, zealous bishops and priests, and covered with honor and glory by the recent canonization of the saint who was Curé of Ars.

Next to the official clergy, have risen, since the beginnings of Christianity, companies of volunteers, shock-troops, whose continued and abundant growth will always be one of the clearest signs of the vitality of the Church.  First of all, in the earliest centuries, came the contemplative orders, whose ceaseless prayer and fierce penances were such a powerful aid in the conversion of the pagan world.

In the Middle Ages, the preaching orders sprang up, with the mendicant and military orders, and those vowed to the ransom of captives in the powers of infidels. Finally, modern times have seen the birth of crowds of teaching institutes, missionary societies, congregations of all sorts, whose mission is to spread abroad every kind of spiritual and material good.

Then, too, at every stage of her history, the Church has received valuable help from the whole body of the faithful, like those fervent Catholics, whose name today is legion, tireless workers, ardent souls who know how to unite their forces and to devote, without stint, to the cause of our common mother, their time, abilities, and fortune, often sacrificing their liberty or their very lives.

A wonderful and encouraging sight, indeed, this providential harvest of works springing up just when they are most needed and in precisely the way that the situation seems to demand! Church history clearly proves that each new need, each new emergency to be faced, has invariably meant the appearance of the institution that the circumstances required.

And so, in our own day, we see a multitude of works that were scarcely even heard of, a generation ago, rise up in opposition to evils of the most serious kind: Catechism classes for first communicants and converts, as well as for abandoned children, all types of Catholic societies, sodalities, and confraternities, laymen’s retreats for young and old of both sexes, Apostleship of Prayer, the Work of the Propagation of the Faith, Catholic action in student and military circles, Catholic press association and other works of both general and local usefulness.

All these forms of apostolate are called into being by the spirit that burned in the soul of St. Paul: “But I most gladly will spend and be spent for your souls,” the spirit that wishes to spread abroad, everywhere, the benefits of the Blood of Christ.

May these humble pages go out to the soldiers of Christ, who, consumed as they are with zeal and ardor for their noble mission, might be exposed, because of the very activity they display, to the danger of not being, above all, men of interior life! For such men, when the day comes for this deficiency in their lives, to be punished, by failures no one seems able to explain and by serious spiritual collapse, may well be tempted to give up the fight and retire, in discouragement, behind the lines.

The thoughts developed in this book have helped us, ourselves, to fight against an excessive exteriorization through good works. May they help others, also, to escape such a mishap, and lead the stream of their courageous action into better channels. May they show that we must never leave the God of works, for the works of God, and that St. Paul’s: “Woe unto me if I preach not the Gospel” does not entitle us to forget: “What does it profit a man, if he gain the whole world and suffer the loss of his own soul?”

May these modest pages also reach those fathers and mothers of families who do not consider the Introduction to the Devout Life out of date, Christian husbands and wives who feel obligated to an apostolate towards one another as well as towards their children, in order to form them in the love and imitation of the Savior. For then they will better understand the need not only of a pious, but of an interior life, if their zeal is to have any success, and if they are to fill their homes with the unction of the spirit of Jesus Christ, and with that unchanging peace which in the face of every trial will always be a characteristic of the truly Christian family.

This article is taken from a chapter in The Soul of the Apostolate by Jean-Baptiste Chautard which is available from TAN Books. 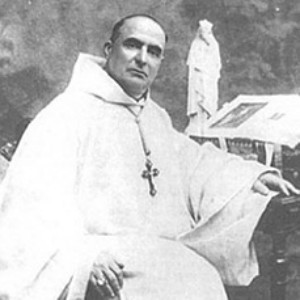 Fr. Jean-Baptiste Chautard (1858-1935) was a Trappist Abbot and religious writer. His most famous work, The Soul of the Apostolate, is a best-selling spiritual treatise published by TAN Books and recommended by numerous Popes.