Our Sanctification Through Mary

Mary alone has found grace with God, both for herself and for every man in particular. The patriarchs and prophets and all the Saints of the old law were not able to find that grace.

Mary gave being and life to the Author of all grace, and that is why she is called the Mother of Grace.

Mary Has Received the Plentitude of Grace

God the Father, from Whom every perfect gift and all grace come, as from its essential source, has given all graces to Mary by giving her His Son, so that, as St. Bernard says, “With his son and in Him, God has given His will to Mary.”

God has entrusted Mary with the keeping, the administration and distribution of all His graces, so that all His graces and gifts pass through her hands; and (according to the power she has received over them), as St. Bernardine teaches, Mary gives to whom she wills, the way she wills, when she wills and as much as she wills, the graces of the Eternal Father, the virtues of Jesus Christ and the gifts of the Holy Ghost.

Mary Forms the Members of Jesus

Through Her the Holy Ghost Produces the Elect

As the Holy Ghost has espoused Mary and has produced in her, by her and from her, His masterpiece, Jesus Christ, the Word Incarnate, and has never repudiated His spouse, so He now continues to produce the elect, in her and by her, in a mysterious but real manner.

Mary Nourishes Souls and Gives Them Growth in God

Mary has received a special office and power over our souls in order to nourish them and give them growth in God. St. Augustine even says that, during their present life, all the elect are hidden in Mary’s womb and that they are not truly born until the Blessed Mother brings them forth to life eternal. Consequently, just as the child draws all its nourishment from the mother, who gives it in proportion to the child’s weakness, in like manner do the elect draw all their spiritual nourishment and strength from Mary.

Mary Dwells in the Elect

It is to Mary that God the Father said: “My daughter, let thy dwelling be in Jacob,” that is, in My elect, prefigured by Jacob. It is to Mary that God the Son said: “My dear Mother, in Israel is thine inheritance,” that is, in the elect. And it is to Mary that the Holy Ghost said: “Take root, My faithful spouse, in My elect.” Whoever, then, is elect and predestinate has the Blessed Virgin with him, dwelling in his soul, and he will allow her to plant there the roots of profound humility, of ardent charity and of every virtue.

Mary Forms Jesus in Us: A Living Mold of God

St. Augustine calls Mary the living “mold of God,” and that indeed she is; for it was in her alone that God was made a true man without losing any feature of the Godhead, and it is also in her alone that man can be truly formed into God, in so far as that is possible for human nature, by the grace of Jesus Christ.

A sculptor has two ways of making a lifelike statue or figure: he may carve the figure out of some hard, shapeless material, using for this purpose his professional skill and knowledge, his strength and the necessary instruments, or he may cast it into a mold. The first manner is long and difficult and subject to many mishaps; a single blow of the hammer or the chisel, awkwardly given, may spoil the whole work. The second is short, easy and smooth: it requires but little work and slight expense, provided the mold be perfect and made to reproduce the figure exactly; provided, moreover, the material used offer no resistance to the hand of the artist.

Mary is the great mold of God, made by the Holy Ghost to form a true God-Man by the Hypostatic Union and to form also a man-God by grace. In that mold none of the features of the Godhead is wanting. Whoever is cast in it, and allows himself to be molded, receives all the features of Jesus Christ, true God. The work is done gently, in a manner proportioned to human weakness, without much pain or labor, in a sure manner, free from all illusion, for where Mary is the devil has never had and never will have access; finally, it is done in a holy and spotless manner, without a shadow of the least stain of sin.

This article is taken from a chapter in The Secret of Mary by St. Louis de Montfort which is available from TAN Books. 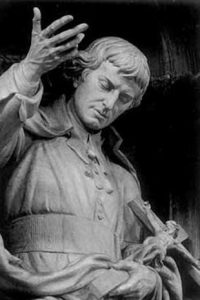 St. Louis de Montfort (1673 – 1716) was a French author, priest, and confessor. He is considered one of the most notable writers in the field of Mariology. His book The Secret of Mary is a best-selling book published by TAN Books.